Could we make more use of Performance Monitoring as a Condition-based Technique?

Research presented in Nowlan and Heap (1) shows the 6 patterns of failure. Two outcomes of this research – both part of the RCM process and philosophy – are to minimise interference, and to consider condition-based maintenance ahead of other types of maintenance.

The Condition Monitoring category covers a massive range of techniques, many of which are now widely practiced, while others that are not yet widely used show great potential. It has, quite rightly, attracted massive attention.

However, on my travels, I frequently see great opportunities for Performance Monitoring. I do often wonder whether it is somewhat overlooked and whether collectively, we could make more use of this technique.

One thing that has changed over the years is that there are more built-in measurements. This means more data is collected about equipment performance –data that is often never used - so there are more opportunities for performance monitoring than ever before.

The following are some examples of Performance Monitoring:

1. As an aircraft engine’s efficiency deteriorates, there is an increase in the Exhaust Gas Temperature (EGT) needed to achieve a given thrust. The difference between the maximum permissible EGT and the peak EGT during take-off is called the EGT Margin, and is used to trigger maintenance intervention. The graph below shows how EGT changes with engine deterioration (OAT is Outside Air Temperature) (3). 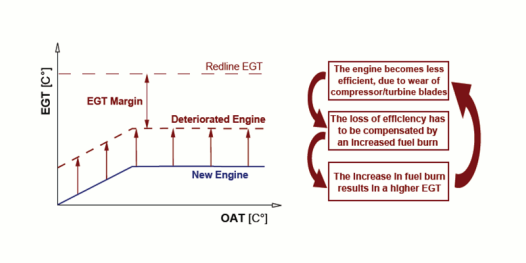 2. If a reciprocating compressor has problems with numerous components such as valves, piston rings and cylinder bores its output will decline. Some users measure the time taken for a compressor to pump up a receiver to a given pressure as an indication of such problems.

3. In the case of a Damper, wear on actuators and the linkage gives increased hysteresis. A simple plot of actuator position versus input signal, with increasing signal and decreasing signal, shows the amount of hysteresis and is therefore a measure of wear.

4. Heat exchanger clogging or deposits will reduce performance. This can be set up to give an indication using built-in temperature gauges (with suitable adjustments for flow, ambient conditions etc)

5. In the Oil Industry, plots of load against displacement of Sucker Rod Lift Pumps (also often known as “Nodding Donkeys”) give indications of about 20 different failure modes, including valve wear, or the wrong size valve for well conditions.

6. Even taking the classic example of a pump whose output deteriorates due to impeller wear, deposits etc, which maintenance task is preferable:

- An overhaul at a fixed interval?

- Taking it apart to inspect the condition?

- Or, measuring the performance deterioration? (the Percentage Reduction in Performance could be calculated for the head values at a given flow or flow at a given head)

7. I carried out a study of wafer handling equipment in an electronics plant. Problems with a complex series of wafer handling steps were a big cause of wafer damage and expensive scrap. While a range of parameters (speed, position, motor torque, step time) was being measured, once again, it was not being used. Previously they had tried a strategy of No Scheduled Maintenance, followed by one of a system overhaul at an arbitrary interval. Instead, a system was set up a to give automatic warnings if deterioration in measured performance parameters was noted. These warnings covered a large number of failure modes of complex equipment.

I could go on, but I hope you get the message. While some of the applications of Performance Monitoring require calculations/ algorithms to be set up, these days, the expertise, computing power and algorithms are usually readily available.

Performance Monitoring is a great condition-based technique because:

- It uses measurements that are often built-in, and often not used so it can be extremely cost effective

- It is truly about maintenance being smart, (rather than busy but not learning much)

It is interesting that there seem to be many more vendors offering packaged monitoring solutions that include performance monitoring and condition monitoring for specific types of equipment (such as reciprocating compressors).

I encourage everybody to look out for more opportunities. I believe they are all over the place. Please get in touch if you agree or disagree, or have any good examples.